Stories of Istanbul - Fat Taxi Skip to the content

The grounds Istanbul stands on today had been an object of desire for centuries; a place that many civilisations dreamed to hold forever, only to lose it to another as time passed by. Occupied by eastern and western forces as well as cultures throughout history, the synthesis of improbable combinations gave birth to the wonderfully chaotic city which we call Istanbul today.

Thankfully, the invaluable traces of civilisations past has weathered the storms of time, and we can witness pieces of history in retrospect by visiting the many sites, structures, and museums located in the city.

Here’s a selection of places you can visit when you’re in Istanbul if you wish to journey through time and take a peek behind the curtains of days gone by. 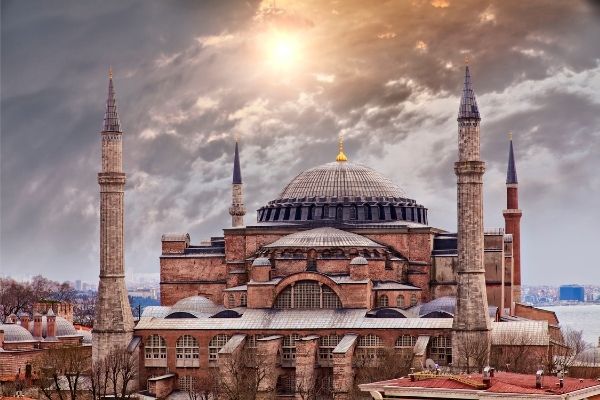 Though modified to become a mosque later on, Hagia Sophia is considered as the pinnacle of Byzantine architecture and the finest example of its kind to survive until our day and age. Taking its name from the Greek words for “Holy Wisdom”, the structure was built as an Orthodox Cathedral by the order of Byzantine Emperor Justinian I in AD 537. The building was turned into a mosque by the order of Mehmed the Conqueror in 1453, after the siege and conquest of Constantinople.
Today, even though there is both domestic and international political debates on the subject, the structure stands as a secular museum as the founder of Turkish Republic Mustafa Kemal Ataturk transformed it in 1935. The museum features both Christian and Islamic items and lore.

Hagia Sophia is among the ancient world’s 7 wonders due to its sophisticated and intricate design, a perfect reflection of Byzantine architecture.

Hagia Sophia stands in Sultanahmet District as one of the greatest achievements in human history, with a long story behind its durable walls; it’s a must-see piece of history if you’re visiting Istanbul. 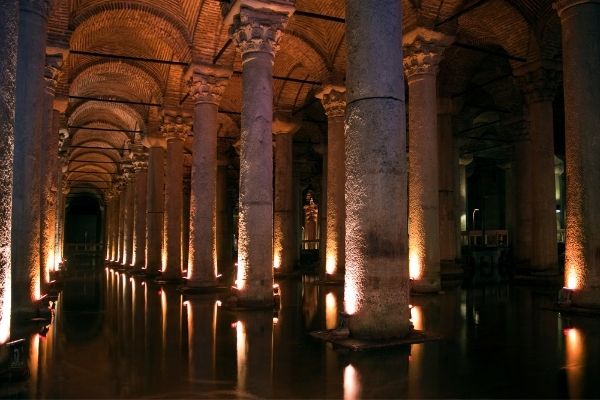 As the largest cistern among hundreds of its kind that lie beneath Istanbul, Basilica Cistern was built in the 6th century as a water storage, meant to be used in times of crisis and war. The structure is called Basilica due to the fact that a Roman Basilica stood in its grounds before the cistern was built. The underground chamber is around 9,800 square meters and the massive ceiling is held by an amazing number of 336 marble columns. The cistern is reached by a 52-step stair that leads down to the main hall.
It is known that most of the material used in the structure was salvaged from other constructions for practical purposes. While most columns are identical in the Cistern, two of the columns have inverted and sideways Medusa heads sculpted into them. Some believe that this was done so to keep the diabolical gaze of the mythological figure away from people, others say that it was just to achieve the perfect size for the columns.

Basilica Cistern is operational for touristic visits and it is located in Sultanahmet, in very close proximity to Hagia Sophia.

Basilica Cistern is a hauntingly beautiful structure that’s been very well preserved to this day and it’s a memorable experience to witness the Cistern’s greatness. 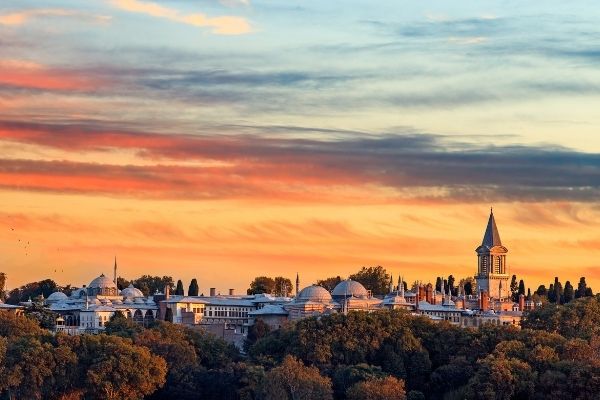 Located on the historical peninsula, Topkapi Palace’s construction started around the year 1460 and took almost 18 years to finish. Besides residing in one of the oldest parts of the city, the palace’s location was also a strategical decision with a clear view of Golden Horn waterway, Bosporus strait and Marmara Sea. Topkapi Palace was a multifunctional base divided in various parts allocated for different purposes such as state affairs and meetings, the Sultan’s harem and his family’s residence, educational chambers for future statesmen and so on.

Topkapi Palace is the largest and oldest of its kind in the world to survive until today.

The royal palace of Ottoman Empire is not just a unique historical structure, but also a perfect model to explore the culture and living conditions of the Ottoman Empire. 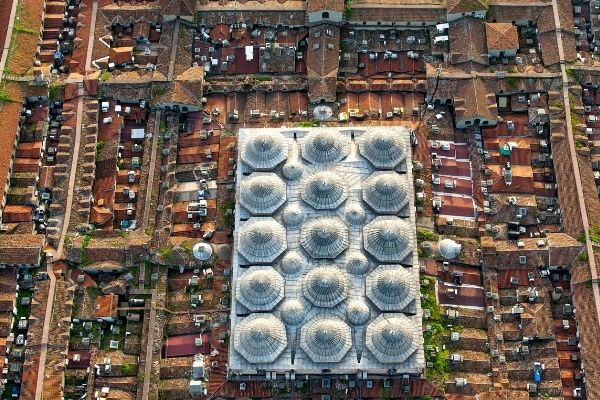 Located in the Old City’s Fatih neighbourhood and originating from the very first years of Ottoman Empire’s rule in Istanbul, Grand Bazaar is the oldest and largest “covered marketplace” in the world. Grand Bazaar is a beautiful mishmash of anything and everything you may look for in Istanbul with over 4,000 shops ranging from cloths to jewels, spices to ornaments and traditional dessert shops to modern cafes.

If you plan to visit Grand Bazaar and go shopping, don’t forget to haggle, as haggling is a tradition; so much so that if you buy anything without haggling, you will most probably be paying more than its worth!

Visited by approximately 250,000 to 400,000 visitors daily, Grand Bazaar is one of the most authentic places you can visit in Istanbul. 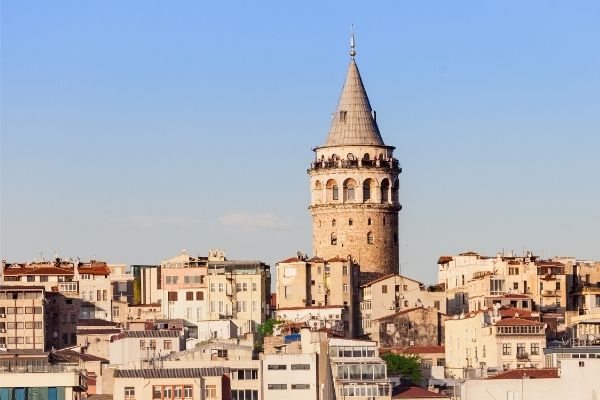 The stone tower of Galata was built in 1348 by the Genoese who lived in the neighbourhood at the time. The tower was the tallest structure in Istanbul with almost 67 meters of height. According to the personal notes of Ottoman historian and traveller Evliya Celebi in his book Seyahatname, the legendary Ottoman aviator Hezarfen Ahmed Celebi flew from the top of the Galata Tower to Uskudar (almost 6 kilometres) with artificial gliding wings, making him one of the earliest intercontinental aviators.

Galata Tower is an amazing spot to watch the sun go down behind the Istanbul silhouette, and it is very close to the famous Istiklal Avenue and Taksim Square. 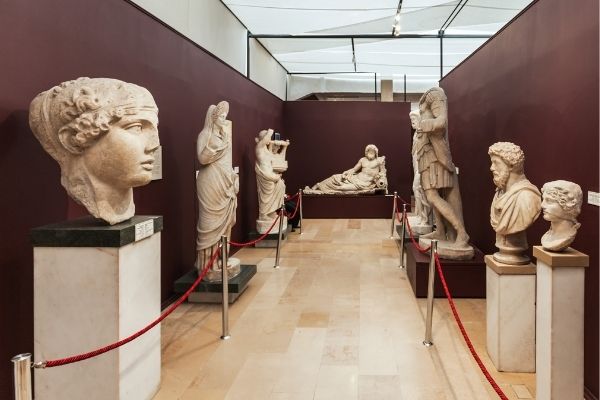 Istanbul Archaeology Museums is a three-part museum in the Eminonu district. The Archaeological Museum, the Museum of the Ancient Orient, and the Museum of Islamic Art comprise the three parts of the exhibition. Housing over 1 million objects that originate from early Anatolian civilizations, Mesopotamia, Arabia, Egypt as well as Ottoman, Turkish, Hellenistic, and Roman cultures.

Istanbul Archaeology Museums is a great way to take a journey through the many centuries left behind in this region and learn more about Istanbul’s history. 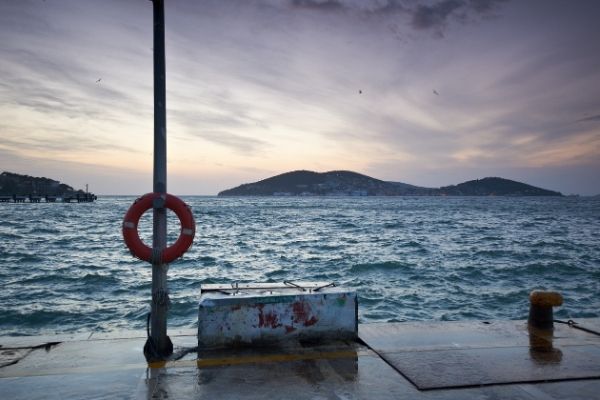 The 9 islands off the shoreline of Istanbul’s Asian Side provide wonderful, small places to visit throughout the year. Also called Red Islands, the Princes’ Islands take their name from the fact that back in the Byzantine Empire’s time, unruly princes and exile royal family members were sent to these islands as banishment, which was a tradition also kept by the Ottoman dynasty. All islands are well worth seeing, with 3 largest as the most tourist attracting ones.

There are ferry rides to all islands and it takes a maximum of 30 minutes to an hour to reach any of them.

Buyukada is the largest of the 9 islands. With numerous fish restaurants, an authentic market square, old and stylish mansions adorning the seaside and the pier, as well as the Aya Yorgi church at the highest point of the island, Buyukada is a touristic dream to experience.

You can also see Russian politician Leon Trotsky’s exile house in Buyukada, where he wrote his book History of the Russian Revolution.

Buyukada, along with the other 8 islands, is an ideal and peaceful way to experience Istanbul, without the daily hustle and crowd of the city. And if you’re visiting in summer, you can even take a swim! 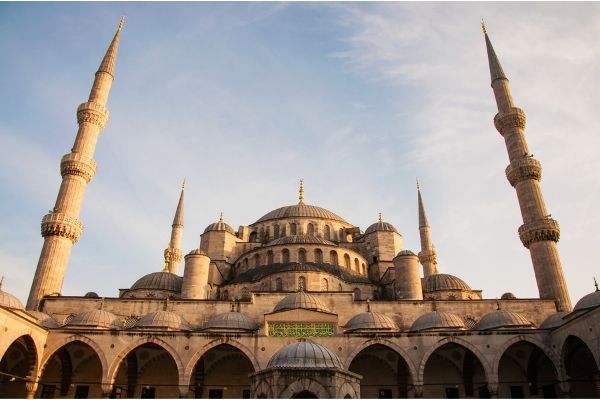 Also known as Blue Mosque due to the blue tiles adorning its walls, Sultan Ahmed Mosque’s construction started in 1609 and continued until 1616. While most mosques have 2 or at most 3 minarets, Blue Mosque has six mighty looking minarets, which makes it a unique mosque compared to the other examples both in Istanbul and the world. Many later mosque designs were inspired by the striking architecture that makes Sultan Ahmed Mosque unique.

Blue Mosque is a timeless classic when it comes to sightseeing in Istanbul with its mesmerising silhouette and magical interior design.